Recently I have been looking for board games to play solo, as I don’t always have other players around. Whilst trawling BoardGameGeek lists, I came across Deep Space D-6

And I think it is awesome! It was an entry in their annual Solitaire Print&Play competition, so I grabbed the files, printed out a set and got playing.

In the game you are commanding a space ship, against a deck full of threat cards – attackers, internal system issues, space anomalies – all your standard Sci-Fi tropes are here. There are 6 “Crew Dice” that you roll, with each face representing a different station – tactical, science, medical, etc. – and you assign these different crew to different ship stations and away missions to defeat or overcome the events drawn from the threat deck.

This game has a nice mix of tactical planning and luck which had me hooked. The creators have since made an extended physical copy on Kickstarter, featuring more threats, and alternative ships to command. They will be organizing a reprint shortly, so at least I haven’t completely missed out!

I decided to convert the original Print & Play files into a more usable format, so I decided to make a module for VASSAL so I can play on my laptop anytime. If you’ve never heard of VASSAL, check it out – it’s a generic engine for playing board games on computer, with options for local & internet multiplayer, and play-by-email. Games are constructed as modules, and many have been made for popular games already, check the list on their wiki.

Using GIMP & the original PDFs, I put together my first VASSAL module:- 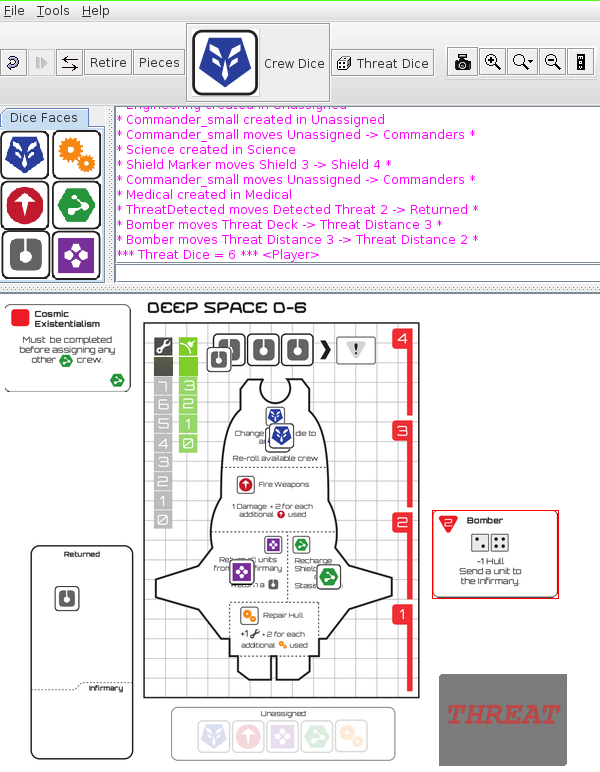 The game is fully playable, but there is quite a bit of manual work to do to play it. There is a button to roll the crew dice, but the output is just printed in the message window – you have to drag the icons as pieces and place them on the board. Also no rules are enforced yet, so it’s easy to cheat yourself! I’m looking to learn more about coding in VASSAL and try and implement some of that later, but as of v0.3 it is fully playable. All rules are even accessible from the Help menu.